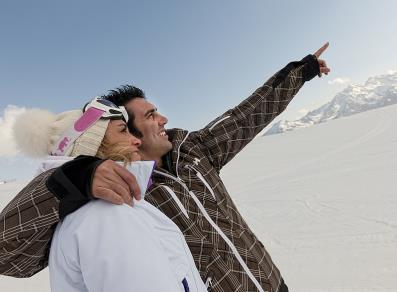 This costume was once worn every day, especially by the local women, up until at least the Second World War, while today its use is reserved only for festivals and events, or performances by the local folk group.
The women’s costume, the like of which is found nowhere else in Valle d’Aosta (although a similar costume exists in the Val Soana, in the neighbouring Piemonte region), is characterised by a wide black skirt made from a thick, rough fabric that was once woven in the village, with a high waist, puffed out at the back and covered at the front by an apron in glossy black fabric, folded upwards, which reaches up to the chest. This austere ensemble is contrasted by the white shirt, with a starched, pleated pillow lace collar, hand made by the local women. Several strands of coloured glass beads are worn around the neck, with a cross hanging from them.

The men’s costume is composed of a white woollen sweater, open at the front, with red and green edges and pompoms of the same colours on the white shirt, worn with black trousers and a black waistcoat.
The black, white, red and green of the costumes (the women’s costume features ribbons in the latter two colours) forms an attractive colour combination.