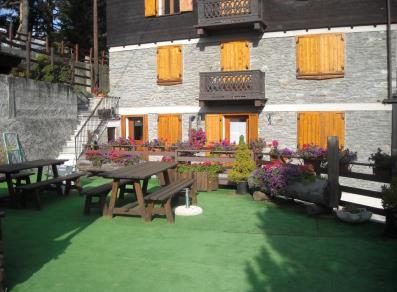 Chapel of Saint Dominic Savio
In 1970 Sir Amato Gorret of Valtournenche ordered to build this chapel in form of half barrel with the access door oriented towards Chamois at 2500 meters of altitude, on Col Clavalité’s water divide. Every year, during the first week of August, the chapel hosts the meeting between the Chamois and the Valtournenche communities, with the celebration of the Holy Mass.

Notre Dame de Pitié
Located in the village of Suisse. It dates back to 1930, however a previous building located further east was founded in 1707, renovated in 1747 and later abandoned. Furnishings mentioned in the XX century church by Mons. Brunod include a gilded, brass chalice from the XVII century and the wooden “Pietà” painted in the XVI – XVIII century, which is now replaced with a plaster structure.

Holy Trinity chapel
Founded in 1691 by Laurent Jeanthon, who gave it an annual income of 120 Lire for maintenance expenses; interdicted in 1786, it was restored in 1880 and dedicated on that occasion to Saint Roch. The facade includes floral motifs that exit from two vases decorated above the frames of the windows. Three oval stones (which are now illegible) lie to the sides of the vases, with the following captions: “Saint Roch priez”, Priez pour nous” and “Je vous salue Marie”.

Chapel of the Transfiguration of Jesus
A circular building (2 meters in diameter) dating back to 1856, however it is built on a previous structure in the Crépin district. Its founder (depicted inside of normal size) appears to be Bonaventura Lettry according to some, while others claim him to be Chamois B. Ducly. The entrance door hosts a semi-circular lunette depicting a landscape and the writing underneath “Le Mont Thabor”. Inside, the painted wooden ceiling depicts a hand supporting a scales descending from a stormy sky.