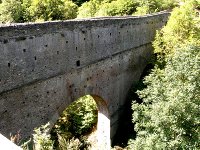 The Gran Paradiso area boasts a wealth of remains that bear witness to the region's history, such as the Roman Aqueduct Bridge of Pont d'Aël (3 B.C.) and the numerous castles from various periods, including those of Introd, Sarriod-de-La-Tour (Saint-Pierre), Saint-Pierre, Chatel-Argent (Villeneuve), La Mothe (Arvier), Montmayeur (at the beginning of the Valgrisenche), Avise, Blonay and Aymavilles. It is possible to take a look inside some of the castles, while others may only be observed from the outside, and others still are now in ruins.

All the parish churches in the area feature a number of scared art treasures inside, but particularly worth mentioning are the Church of Saint-Léger in Aymavilles, with its distinctive trompe-l'œil façade and mediaeval bell tower, and Sainte-Marie in Villeneuve, which dates back to the early Christian period and contains frescoes painted between the 12th and 15th centuries.

Splendid examples of rural dwellings include the Maison Bruil in Introd and the Maison de Cogne Gérard-Dayné.

A visit to the Maison Bruil is like a trip back into the past, to the days when the building was home to both people and animals, all grouped together under the same roof, with areas set aside for the production, conservation and cooking of food. Those interested in taking a closer look at the traditional local architecture using wood and stone should take a look around the Maison de Cogne Gérard-Dayné, a particularly complex construction featuring a large hayshed with huge, strong wooden beams.

The typical craft items of the Gran Paradiso area are the "dentelles", the pillow lace articles fashioned by the women of Cogne and the "draps" of Valgrisenche, wool fabrics created on traditional looms.