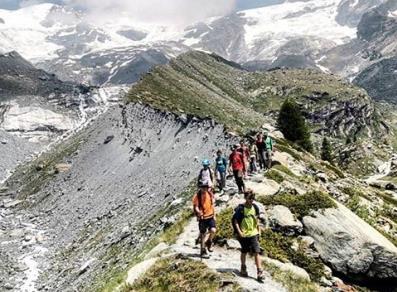 The terrace on which what is now the village of Touraz (Sarre) stands, a splendid balcony over Valle d’Aosta, is a very pleasant and peaceful site, in sharp contrast with the enormous gash on the mountain to the west: Becca France (2,312 metres). The name “Becca France” implies a two-fold interpretation: according to some authors, the name of this mountain is said to derive from the fact that, from its summit it is possible to see the French mountains (in reality this is unlikely, given its modest altitude), it is more likely that the term “france” is a mistaken translation from the patois of the word “frantze” (frank, sincere, solid).
The landslide event of Becca France, above Sarre, constitutes the largest natural disaster known to have struck Valle d’Aosta. The landslide occurred on the 6th of July 1564 at 6 in the morning, causing the destruction of the ancient village of Thora, which stood in the incision of the Clusellaz river on a plateau on the orographical left hand side of the slope, opposite that from which the landslide originated, in the area of Goille Pesse.
Reports suggest that approximately 500 people lost their lives during this tragedy.
Today it is still possible to observe the imposing detachment niche of the landslide, which occupies the entire western slope of Becca France and the accumulation area, which is now covered by spruce and larch forests.

Along state road 26 (Aosta-Courmayeur), take the turn-off for Sarre. Proceed along a winding road which leads to Ville sur Sarre in approximately twenty minutes, then follow the signposts for Thouraz, which you will reach in approximately ten minutes, until the end of the carriageable road and from where it is possible to have a good frontal view over the detachment niche of the landslide.

Having reached the hamlet of Thouraz, we recommend that you cross the small residential area, which currently houses a lovely ranch and proceed for around one hundred metres in a westerly direction, where it is possible to observe the landslide in its entirety. (1)
Getting back onto the paved road, it is possible to proceed towards the little church of the village and park near the junction with the dirt road, from here it is sufficient to proceed on foot for approximately 20 minutes, until you reach the hamlet called Bois de Goille Pesse. (2)
Here an enormous mass bears an inscription that recalls the destruction of the suburb of Thoura which, on the basis of the reconstruction of the event, is said to have stood near this forest. Before leaving Becca France and its fascinating history, we recommend that you go up as far as the village church, which is situated on a natural balcony, it offers a splendid view over the central valley. The detachment niche of Becca France is easily distinguishable from the main valley floor near the residential areas of Gressan and Jovençan.