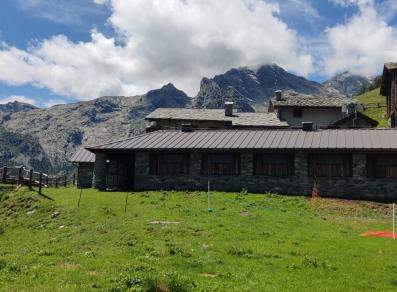 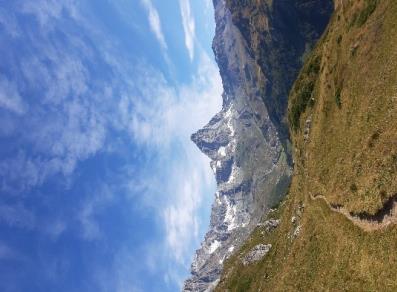 Aosta Ovest highway exit. Follow the directions for Courmayeur. In Arvier, turn left for Valgrisenche that leads to the village of Usellières, where you can park.

Located on the ridge that divides Valgrisenche and Valle di Rhêmes – rising between the Bassac South and North peaks, Grande Traversière seems like a modest rocky pyramid where, on the Valgrisenche side, the Bassac glacier lowers towards the Vaudet mountain pastures. The eastern side of the mountain, facing Valle di Rhêmes, rests on the northern and central Traversière glaciers, modest masses now visibly reduced.

Day one
From Usellières, follow the farm road, closed to unauthorised traffic, to the Saxe Savoie mountain pasture. Continue along the east path that hugs the right bank of the stream and crosses the narrow part of the valley where you will usually find a small snowfield. Climb up the pastures and where you’ll find the Bezzi hut after the grassy rises.
Day two
From the hut, take the path with several hairpins that climbs the slope behind the hut to the Piano del Vaudet. At the edge of this grassy and stone covered area, leave the path and follow a watershed to the moraine on the left edge of the Bassac glacier. Climb the rocks that rise to altitude 2,870 m where the glacier starts. Still on the rocks, keeping to the left of the crevasses, you’ll reach a wide gap at altitude 3,414 m between Grande Traversière and the south Bassac peak. From the depression, cross the easy snow and then rock ridge to the top.

Descent down the upward itinerary.