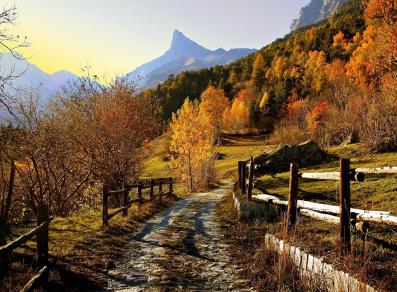 Chapel of Our Lady of the Snows
It stands in the hamlet of Mühni, at an altitude of 2006 metres, at the bottom of the valley of San Grato, before taking the trail that leads to Col Dondeuil. It was erected as an ex-voto by the Choquer brothers, who escaped an avalanche and consecrated in 1667.

Chapel of San Grato:
This chapel, which is of ancient origin and which was rebuilt in 1701, gives its name to the entire gorge and rises up within the district of Chröiz. It was a gathering place for the people of Issime who lived in the “Tiers de la Montagne” one of the three parts into which the territory of Issime was divided from the beginning of the 1700’s. It was the families of the town, under the guidance of the master bricklayer Pierre Christillin who built the current church during the early 1700’s. The chapel certainly existed in an previous era, given that it was mentioned in the famous “devil’s trial” drafted in 1601. In the interior, the architraves with wooden statues of Our Lady and Saint Gratus are noteworthy, along with the painted and gilded altar dating back to the 17th century. In the past, the feast of Saint Barbara on the 4th of December was the occasion on which the men who had returned from seasonal emigration to France and Switzerland returned and met in this Chapel.

Chapel of San Nicola in Bioley:
situated in the district of Bioley, this chapel appears to date back to the 15th century, although the current building is dated 1621 and was erected in compliance with the wishes of Jean-Pierre Lyonettaz and the Stefanyn brothers.
It has two wooden statues from the eighteenth century, one of Saint Nicholas and one of Saint Roch, restored in 1867 by Giovanni Guala.
The placename Bioley derives from the patois “bioula” (birch) and is also the patronymic of a noble family from Issime.

Chapel of Santa Margherita:
located in the Valley of San Grato, it appears to have been built in the 17th century according to the wishes of the inhabitants after a famous Devil’s trial. According to legend in fact, after the earthquake of 1600 every effort was made to drive the “Devil” out of Issime, given that he was considered responsible for this natural disaster. A real trial was held in fact and two priests were called from Biella, canon Morra and the curate Serra, they performed the exorcisms. After a discussion between the two religious men and the devil, which lasted three days, the latter left and the inhabitants fulfilled the votive offering made. And so the chapel in honour of Saint Margaret was built, situated in the district of Buart. The current building, which was rebuilt in 1740, still has a wooden altar with tortile columns. Near the chapel it is possible to admire a fountain with a stone bath dated 1593.