Walk from Courmayeur to Dolonne 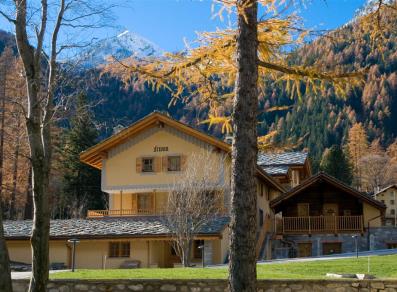 How: on foot or by bike.
Duration: around 2 hours.
When: all year round.
Distance: about 3 km.

A leisurely stroll to discover a village full of history closely linked to its traditions, passing through the sites of the ancient thermal springs.

Once at piazzale Monte Bianco, take the direct road to Dolonne.
Immediately after a few meters, down on the left, emerges the austere entrance of the cemetery which was moved to this position in the mid ’50s of the 20th century, whereas previously it was located where the current language school is located, almost opposite the Town hall.
Continuing the descent, you approach the Dora; immediately in view of the bridge, the current complex of the hotel Tavernier perches on the right bank of the river. Here, at least up until the end of the 1700s, there was the Jeanne Baptiste spring, so called in tribute to the dowager duchess Marie Jeanne Baptisteof Savoy; in 1883 Michel Tavernier opened one of the first hydrotherapy establishments which initially bore the name of the disappeared spring.
For the times, this structure was very avant-garde and offered its guests a whole series of comforts: in fact, under constant medical supervision, they offered ferruginous baths, hot showers and massages. Subsequently, no longer being in step with the times, they closed and were then transformed into a hotel in 1923. The hotel gradually become obsolete until it finally closed; it reopened its doors in the ’60s as ‘Stella d’Oro’ boarding house in which there was also a gambling house. After another period of ceased activity, the structure was relived to how it is seen today, remaining absolutely faithful to the original architectural aspect.
On the left bank, upstream of the bridge, in a place which is inaccessible due to the frequent turbulence of the river, there was another famous spring called la Regina. This iron-rich water, useful for anaemia and infections of the nervous and digestive system, was channelled into a small building opening in 1886 by Queen Margaret and made available to the public.
Once crossed the bridge, to the right there is ‘rue des Forges’, the name of which is evident of its proximity to the old productive areas once located at La Villette (hydraulically operated mills and workshops); the current rue des Forges, in fact, closely follows what was the path of a now tube channel. Climbing in the direction of the village, following the panoramic road and enjoying the meadows which stretch towards the Dora and underline the profile of the veulla, i.e. the capital of the province.
At the top of the hill there is a small widening decorated by a garden at the centre of which stands a monument dedicated to the alpine guides of Dolonne: the sculpture, created by R. Priod and inaugurated on 15th July 2000, is a sort of menhir, i.e. a monumental ancestral form, the simplicity of which is emphasized by the granite from which it was carved. The significant element, however, is given by a clay ammonite: a marine symbol which is reminiscent of ancient times in which the imposing alpine ranges were yet to emerge from the water and, at the same time, with its fragility, reminds us of the vulnerability of human life with respect to the magnificence of the mountain.