A circular trip in Sarre 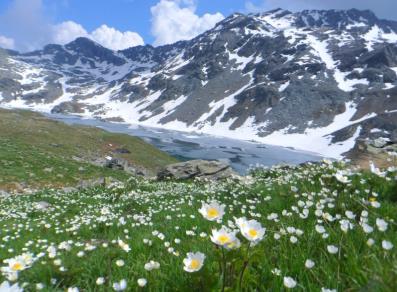 The itinerary begins in the major town of Sarre which can be reached by following the state road no. 26 from Aosta towards Courmayeur or by taking the Aosta Ovest (Aosta west) motorway exit.

Although the route is not particularly long, it features many difficult technical stretches, both uphill and downhill. Therefore, it is suitable for people who have a certain amount of experience on a bike.
The itinerary involves a trip around the town of Sarre; during the route you can contemplate various aspects this area offers besides just sport. These include landscape, naturalistic, historical and cultural elements.

Set off from the parish Church of Saint-Maurice, in the centre of Sarre; proceeding towards the west you reach the castle and then, crossing the villages of Lalex and Pertusat you go uphill until reaching Bréan. From here you continue towards the municipality of Saint-Pierre and, close to the top of the hill, take the forest slope to the east that goes upwards along the Cote di Bellon. After crossing the Clusellaz stream you descend until reaching the municipal road that connects Sarre to the upper villages of Ville sur Sarre and Bellon. After around a kilometre of asphalt, a dirt road appears after the first sharp turn to the left. Follow this until you reach the highest point of the route in Pallue. Continue by following the path that reaches Oveillan; then, from the mule track you reach the asphalt road and continue until Betende. Near the waterfall turn right and continue on level ground until Pleod; from here, a path leads you to the church of Chesallet. Return to Sarre by following the municipal road called “Panoramica” towards the west.