Bridges and age-old homes in the Champorcher valley 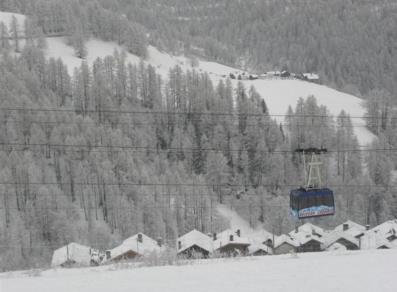 An original architecture, linked to the impervious land

In a rocky and sloping valley like Champorcher, crossing the river banks was not an easy task. Placing the bridge foundations on top of rocky gulfs, over turbulent waters, the master builders of the XVII and XVIII centuries created masterpieces, that still today stand and resist the impressive floods.

Only 6 km from the central vallley, at the chieftown of Pontboset, a path joins different winding mule-back bridges on the Rathus river; these bridges lead to the sunny hillside where there are numerous abandoned villages.

These houses, attached to the slopes, are characterized by their “soulei”, high haylofts closed by vertical walls bound by pillars on the corners. Small two-storey stone homes, built beside each other, were used as drying rooms for chestnuts and remind us that, in 1000 meters in altitude, these populations existed thanks to this nutritious fruit.

Higher up the culture of grains takes on heroic aspects. The rye fields of long ago, overhanging one on top of the other, thanks to the layout of the hillside, characterize this landscape and were entirely built by man.
In the villages, like Outre l’Eve, numerous grain barns show the expert skills of the carpenters of this mountain valley, which is worth discovering.
The ethnographic hemp museum at Chardonney was built under an old XVIII century barn, furnishing an inhabited stable, much like the one of Champorcher in the winter. The inhabitants were specialized in the weaving of hemp and this precious material was carried from all over Valle d’Aosta. It was a primary material in the daily lives of the people and they used it to make underwear, drapes and sheets.