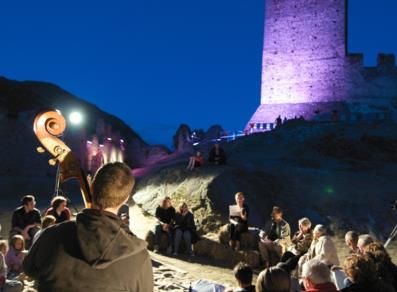 Situated in the heart of the inhabited centre of Bionaz, the church was built in 1694, as we see from the writing sculpted on the southern edge, enlarging the primitive chapel dating from 1617, which had already become the parish church in 1640. The bell tower also dates back to the end of the 17th century and was restored in 1964.

INTERESTING DETAILS:
- on the facade and in the presbytery, frescoes and paintings by the Genovese painter Ettore Mazzini, buried in the cemetery of Bionaz
- the main altar, in a Baroque style, in partially gilded wood
- the left hand altar, from the 18th century, a beautiful example of the Baroque style of Valle d’Aosta, with a statue of the Madonna with child dating back to the 17th century, surrounded by medallions showing the mysteries of the Rosary, restored in 1990.
- in the small museum-window display inside the church there is a collection of certain objects of sacred art including a chasuble from the 17th century which belonged to the chapel of La Lechère. It was a gift from the archbishop of Paris, Monsignor Leclerc de Juigné, who, having escaped from his diocese during the era of the French revolution, had crossed Col Collon to take refuge in Bionaz.