The nature trail: alpine trekking to discover flora and fauna

Alta Via Trail 2, known as the nature Trail, is a trekking trail of exceptional natural interest. A large part of its route passes through the Gran Paradiso National Park and the Mont Avic Regional Park.

This route passes through wild areas of magnificent landscapes where numerous examples of alpine flora and fauna are to be found, including some of the rarest species, as well as through village areas where it is possible to explore the ancient origins of Aosta Valley traditions and crafts. Crossing the mountains to the right of the River Dora Baltea, Alta Via Trail 2 is accessible to everyone since it follows well-marked footpaths, with an average width of around 80 cm., and is entirely sign-posted. The trekker who is used to mountain walking will be able to walk along its whole length, while those who are looking forward to trying footpath walking for the first time will also be able to follow some of the short, lower altitude stretches.

The route leads from Courmayeur to Donnas, with 14 daily stages which require 3-5 hours walking time each, offering various stopping points: camping sites, huts, refuges, hotels and hostels. The routes descend into the valley at the end of almost every stage, where it is possible to use the services provided by each of the villages or interrupt your journey and return to the central valley by bus. The route can be walked in the summer months and crosses medium and high altitude mountain areas, through meadows, pasturelands, woodlands and rocky outcrops, maintaining an average altitude of around 2,000 m. and sometimes reaching 3,000 m. (on Col Loson it reaches almost 3.300 m.!!).

Here, where nature still remains intact, it is possible to admire the chamois on the run or the elegant golden eagle in flight, or to find yourself surrounded by a herd of male ibex who gather in the final hours of daylight to graze in the valley grasslands below the moraines and the eternal snows. The ideal period to admire the flora is the month of July, when the mountain flowers are at their peak of beauty. Here in the mountains, the small patches of brilliantly coloured flowers, which at lower altitudes become lost among the luxuriant vegetation, assume a particular importance: they symbolise the triumph of life over the harshness of the environment. 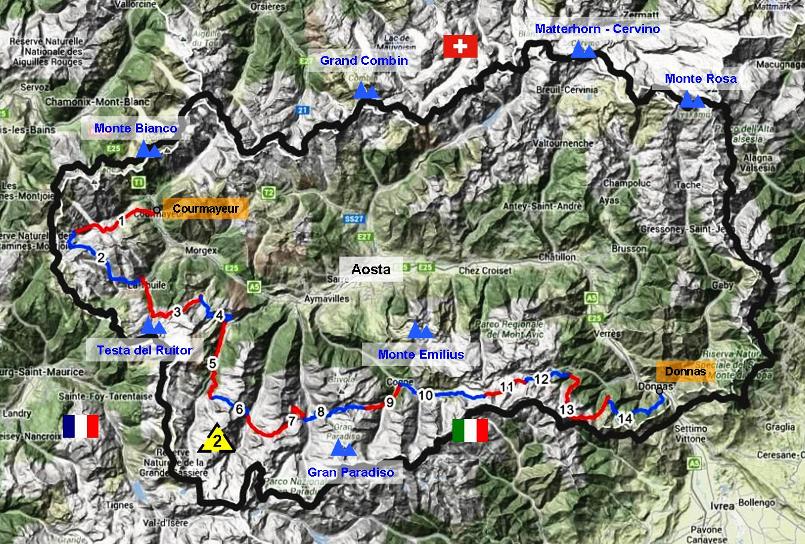 Click on the stage number to go to the relevant info. file 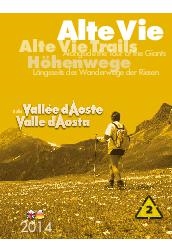