Trekking on the Walser territory around the Monte Rosa massif

Due to landslides, the sector of the 7A - TMR "Staffal / Gabiet" trail between the Locker bridge and the Gabiet has been closed.

The route, which is in excess of 3,000 m in altitude in certain points, passes throughthe Italian territory, the valleys of Gressoney, Ayas and Valtournenche, crossing various Walser settlements, in the presence of Mont-Rose. The itinerary, which is over 150 km in length is normally open from July to September and takes about 9 days walking.

The route enters Aosta Valley from the Olen Pass, with a beautiful view over Valsesia, and then goes downhill towards the district of Stafal in Gressoney, taking in the Gabiet gorge, where the mountain hut of the same name is located along with the Moos mountain hut. It then goes back uphill to Bettaforca pass, passing near the chapel of Sant’Anna, an exceptional view point on the Rosa mountain range, from Lyskamm to the famous Queen Margaret hut. It then accesses Val d’Ayas, through the Fourcare gorge, in the direction of the Guide Frachey and G.B. Ferraro mountain huts. A slight descent then leads to Fiéry, from where the trail then goes back uphill towards the upper pass of the Cime Bianche, the watershed with Valtournenche and giving a spectacular lookout over the Mattherhorn, which appears in all of its majesty. A convenient trail and a farm lead to the Cime Bianche lake and to the Bontadini chapel, from where the trail then goes back uphill towards the Teodulo mountain hut and the pass of the same name, which borders with the Swiss territory. In Switzerland, the trail reaches Zermatt, Grächen and Saas Fee, then entering Italy from the Monte Moro pass, towards the Anzasca Valley; it thendescends to Macugnaga and crosses the Turlo pass, arriving in Alagna, before then going back uphill to the Olen pass. 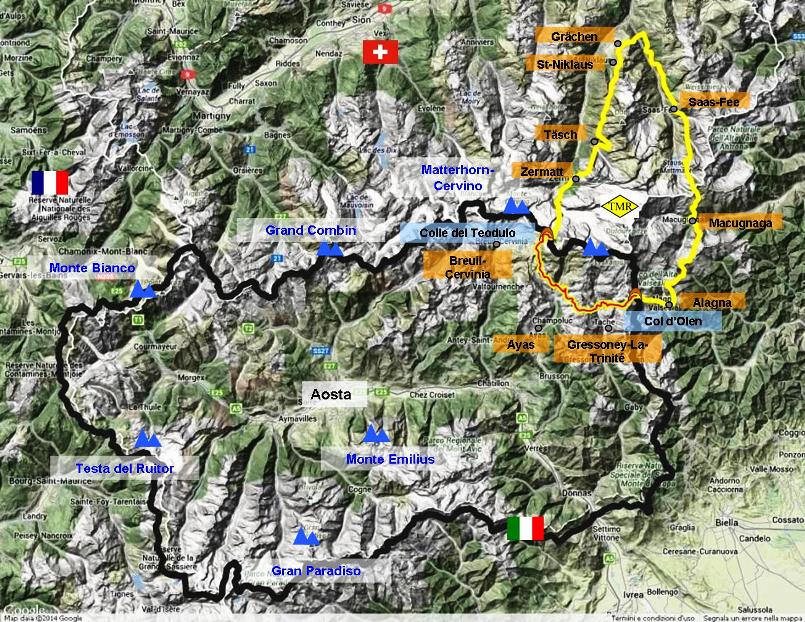