The Tour du Mont-Blanc is a spectacular trek that unwinds around the Mont Blanc massif, it crosses the Italian, Swiss and French territories, and to those who embark on it  it gives the gift of unique views of Europe's, highest mountain range: severe rocky walls, glaciers long overhanging, gravelly moraines, meadows and grasslands. The itinerary unwinds over almost 170 km and may be completed over a period of approximately 10 days walking.

It enters Aosta Valley from the La Seigne pass and proceeds into the upper Val Vény, as far as the Elisabetta mountain retreat, from where it then descends to lac Combal. The route then ascends to the mountain pastures of Arp Vieille, proceeding with an up and down view as far as lac Chécrouit and the Maison Vieille mountain hut, before reaching the bottom of the valley, Dolonne and Courmayeur. From the town, the route ascends as far as the Bertone mountain hut, then takes all of Val Ferret along a trail half way up the hill, a veritable panoramic balcony over the Mont Blanc mountain range: from the spire of the Aiguille Noire de Peuteurey to the peak of Mount Blanc, from the tooth of the Giant to the Grandes Jorasses and to Mont Dolent. It first arrives at the Bonatti mountain hut and then, proceeding in the direction of the head of Val Ferret, to the Elena mountain hut, then going back up towards the Grand Ferret pass, as far as the Swiss border. In Switzerland, the route touches the districts of La Fouly and Champex and then enters France from Col de la Balme; it passes near Chamonix and Les Houches and lastly, it crosses the Croix pass and the La Seigne pass before coming back into Aosta Valley. 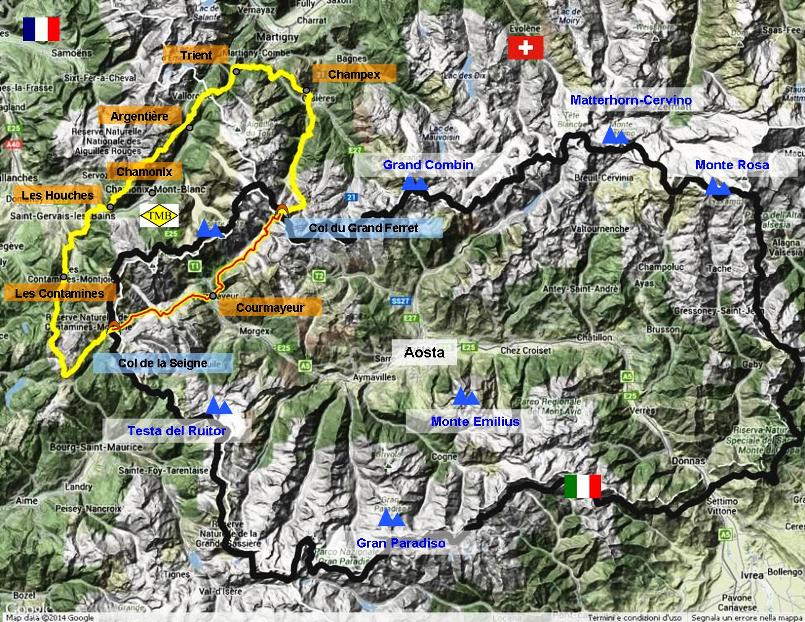